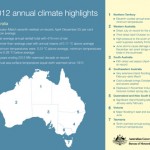 Bureau of Meteorology today released its Annual Australian Climate Statement that provides a detailed summary of the significant weather and climate events in Australia in 2012.

The report states that In 2012, maximum temperatures in Australia were 0.51 °C above average, and minimum temperatures 0.28 °C below average. While both 2011 and 2012 were cooler than recent years, the last decade (2003–2012) has been one of Australia’s warmest on record; with an anomaly of +0.44 °C, the fifth-warmest 10-year period on record. For more information

A landslide has badly damaged WithOneSeed's little red Drover. The nursery vehicle was hit this…