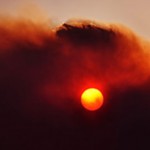 Australia is on track for its warmest ever year, says study. The past 12 months have been 0.22C warmer than any other equivalent period prior to 2013, says Climate Council.

The Climate Council study, called Off the Charts, says that the country has just had its warmest ever 12-month period, from 1 November 2012 to 31 October 2013. This is the third month in a row that this 12-month temperature record has been broken.

Researchers warn record temperatures could hit as early as 2020. "The global average under the…

60,000 Australians attended national day of climate action events around the country as the Carbon…

Sydney was burning yesterday; Why is no one talking about climate change? The Climate Commission…