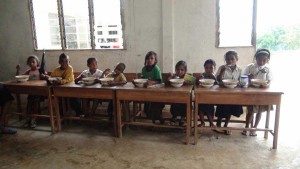 According to statistics from the UN agency and UNICEF, malnutrition in Timor-Leste has risen to 58 percent. These figures show that Timor-Leste is in third place among Asian countries, where the majority of the population lives “inside” malnutrition.

The representative of UNICEF, Honggwel Gao said that health and nutrition are key factors for the growth of children and are also important for human development in the nation.

The prevalence of malnutrition among mothers and children, including micro nutrition deficiency is quite high in Timor-Leste, based on data from a survey conducted on health and demography between 2009 and 2010.

The deputy prime minister, Fernando La Sama de Araújo admitted that malnutrition remains a major problem for Timor-Leste, because many children aged under five have skinny arms and legs and dry bloated bellies.

“I call the attention of the Health Minister Sergio Lobo, his two deputies and even the directors and employees in the Ministry of Health to this, and for them to work harder to prevent and reduce the percentage of malnutrition in Timor-Leste,” said Fernando La Sama on last Wednesday, during his opening speech to the meeting on validation and strategic review on nutrition held at the Hotel Timor in Dili.

WithOneSeed is working to end poverty and hunger.

WithOneSeed co-founders Andrew Mahar AM and Leo Guterres have been working in Baguia, Timor-Leste on…