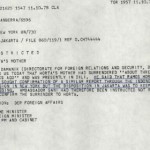 Key Australian government officials sounded early warnings about the rapidly deteriorating situation in East Timor in the late 1970s that led to the starvation deaths of an estimated 100,000 people, recently-released diplomatic cables reveal.

The cables, sent from Jakarta, warned over several months about the looming human catastrophe, caused by the Indonesian military’s campaign against the Fretilin independence movement.

They add weight to accusations that Australia and its allies were slow to act in a bid to avert the tragedy.

An opportunity to design a sustainable future

Correcting the past injustices and inequalities in Timor Leste, particularly in terms of human, social…