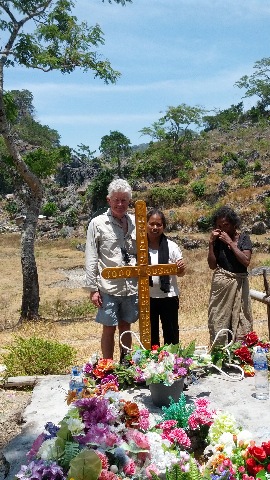 The 28th of October 2014 was the second anniversary of the death of John Tadeo Gusmao, co founder of WithOneSeed. John was in his mid forties when he died from a three month illness.

John was a son, a brother, a husband, a father and a friend with a big heart.  I saw him in each of these roles over the five years I knew him.

John was a man with a commitment to the welfare and wellbeing of his community.  He was a man of integrity and humour.

John is missed deeply by his wife Leopoldina and their six children.

I was fortunate enough to have met and worked with John over a short five years.

Leopoldina and me at John’s grave this month

A fragile life with death ever present

I have returned to Dili after five days in Baguia.  It was good to see…

In postconflict Timor Leste, rainforest dwellers must choose between restoring and protecting a scarred environment…