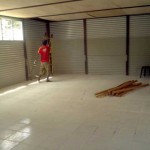 The final touches are being applied to the new InfoTimor office, before staff move in the computers and office equipment. The new office will provide refurbished computers, IT training and internet access to the broader Liquiça community.

The District of Liquiça is situated on the northern coast of Timor Leste and has a population of 63,403 (Census 2010) and an area of 543 square kilometers. Its Subdistricts are Bazartete, Liquiça and Maubara. There are two other InfoTimor offices are in Baucau and Suai.

In the mountains of Baguia, Timor-Leste, a small village school has been damaged when strong winds…

Andrew Mahar AM receives his Order of Australia from the Governor of Victoria, His Excellency…

Meet Mick and Chris, education coordinators at the Royal Botanic Gardens, Melbourne. In a recently…